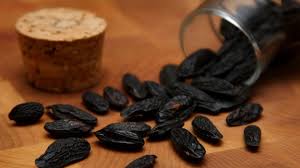 Tonka beans are derived from the flowering tree dipteryx odorata, also known as cumara, which is part of the pea family. Cumara trees are native to South and Central America, growing in tropical rainforests. Venezuela and Brazil are two of the biggest producers of tonka beans internationally. The bean itself is a wrinkly, black oval. Think of a drier and longer version of a dried prune – that’s what a tonka bean looks like.

The smell of the bean is due to a high amount of a chemical called coumarin. Did you know that coumarin is found in a lot of plants you see on a regular basis? Along with being found in cherry blossom trees and several sweet grasses, you’ve actually had coumarin if you’ve ever eaten cherries, black currants and strawberries. It’s also used as a vanilla substitute in Mexican imitation vanilla. To collect the coumarin, the tonka bean is soaked in alcohol (often rum) for 1-2 days. Once it’s re-dried, the white crystals of coumarin can be scraped off the outside.

When digested as an elixir, tonka beans are believed to help with ailments including cough, nausea, ulcers and cramps. Since our fragrances aren’t designed to be drank, you’ll be delighted to know that the scent itself has benefits. Tonka beans are used as a natural aphrodisiac, increasing the desire a partner or potential partner. This makes it a smart choice if you’re going out on a date night or to a bar. You can be confident that a fragrance you’re wearing can last for a long time if it contains tonka beans because the oil holds onto fruity, floral and vanilla scents to keep them on your skin for longer.

Tonka beans are great if you want to smell warm and inviting. Along with the vanilla and cinnamon scents, there are hints of similar smells in it, including cloves and almonds. When it’s cold outside and you feel like cuddling, tonka beans combine the sweetness and sexiness you’d want when spending time with someone you love.

You can find this flavorful scent in Turbulent and Onyx on our products page. Gender has no limits, and neither do our fragrances!